What a brilliant, creative workshop! Thanks to Cathy and Caroline for helping out and to the children and their families for coming and getiing into the activity so enthusiastically,. And the result was some rather lovely, unique rocket comics 🙂

After a jam-packed session at TAAG on Tuesday, next on the bill is Animation Club at Teignmouth Library, kicking off next Monday from 4-5pm. See below for more details 🙂

Our theme will be Mythical Creatures (aka monsters!) and the kids will get to create and animate their own special mythical creature, making up unique, individual stories.

We still have places available, so please get in touch if you need more info and to book!

Two  Small World events are coming up in February: a one-off animation workshop during half term celebrating the release of the new Aardman film “Early Man”, and an animation club kicking off at Teignmouth library after half term 🙂

To celebrate the release of “Early Man” come and create and animate your own 3D early cave person character! This fun workshop is aimed at 7-12 year-olds, but open to keen-beans either side of that age group 🙂

Running from 10am-12.30pm on Tuesday 13th February at TAAG, Northumberland Place in Teignmouth, you have the option of staying to enjoy making and creating with your child, or dropping them off and collecting them at the end of the session. Unaccompanied children must be aged 8 and over.

The session is £8 per child, with sibling reductions available. Advance booking is essential as there are limited spaces.

Kicking off on Monday 19th February and running till March 26th, the Small World Animation Club will run between 4-5pm on five consecutive Monday nights (except March 5th when there is no session).

We’ll be inventing and creating characters, making up stories and working in all sorts of different media to make short 2D and 3D animations.

The price for all five sessions is £20 per child, payable in advance. Booking in advance is essential. The club is aimed at 7-11 year olds, but 6 year olds can join if accompanied by an adult at all the sessions. Limited number of places so early booking advised.

Get in touch by email smallworldanimations@hotmail.co.uk or phone 07746326860 for inquiries or if you want to book.

Hi Everyone! I’m putting on my Midnight Monsters Workshop at Teign Heritage Centre on 27th October 2-5pm – come down with your kids and spend the afternoon creating scary shadow monsters and animating them on a lightbox! Ideal for 5s and up – but younger children also love it with a bit of help from a grownup! And grownups also love it. :). It’s £5 per child and free for adults.

Hope to see you there! 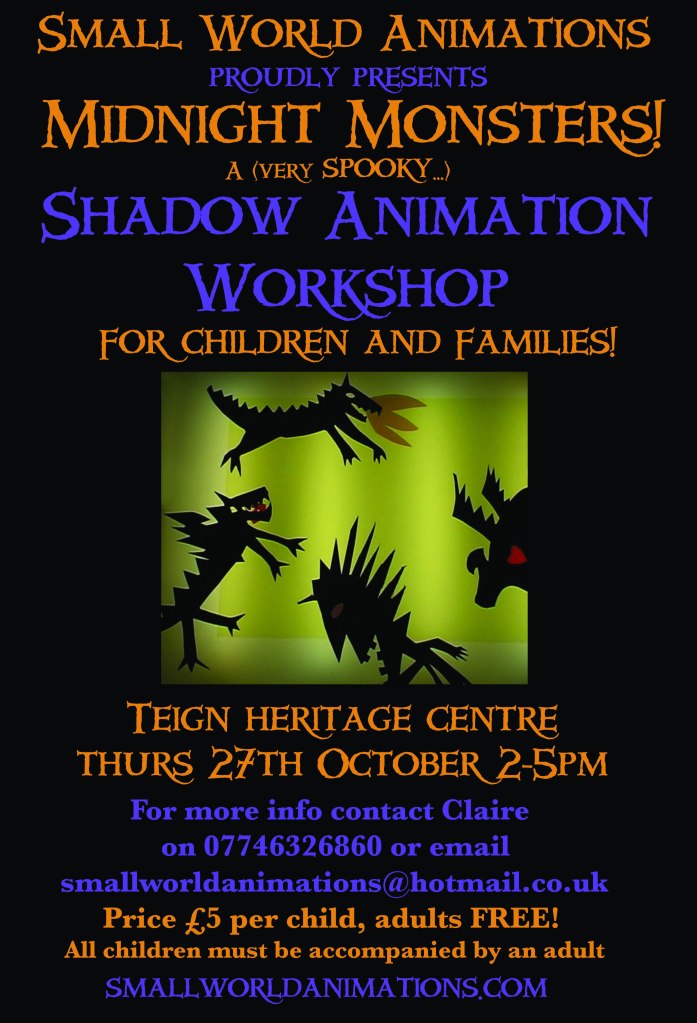